United playmaker Bruno Fernandes (£132.4m) is fifth on the list.

The CIES use a range of variables including a player’s age, performances, economic value of their club and inflation to work out estimated transfer values.

Foden, 21, shone during City’s triumphant Premier League campaign, his performances earning him the PFA Young Player of the Year award.

The versatile attacker also scored three goals and notched three assists to help Pep Guardiola’s side reach the Champions League final, which they lost to Chelsea.

Greenwood and Rashford were instrumental in helping United finish second in the Premier League and reach the Europa League final, scoring 12 and 21 goals in all competitions respectively.

Foden and Rashford are part of England’s Euro 2020 squad, but Greenwood was forced to withdraw because of injury.

Borussia Dortmund striker Erling Braut Haaland, who scored 41 goals in as many games in the 2020-21 campaign, is the most valuable non-Premier League player at 155.5m euros (£133.5m).

Manchester City’s Ederson (£53.2m) and Ruben Dias (£97.9m) are the most-valuable goalkeeper and centre-back, while Fernandes, 26, is one of only three players aged 25 or over whose price exceeds 100m euros, with the other two being City’s Bernardo Silva, 26, and Chelsea striker Timo Werner, 25. 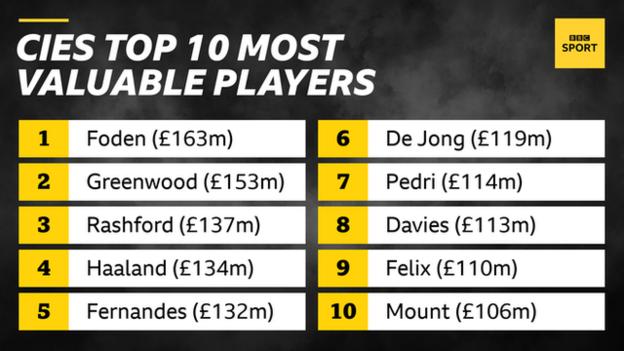